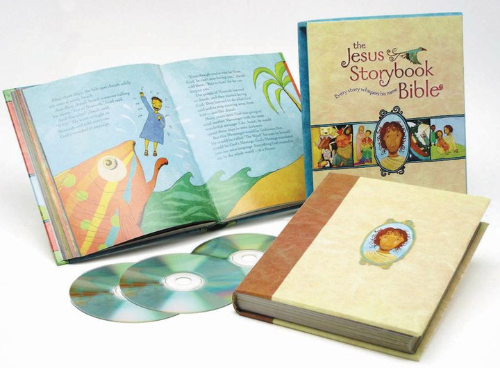 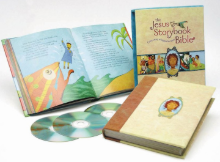 This beautiful deluxe edition of the Moonbeam Award Gold Medal Winner is a storybook Bible to treasure. It includes the narrative on three CDs so children can read along. Experience all the emotion and drama as award-winning actor David Suchet’s narration brings this storybook Bible to life.

Every Story Whispers His Name The award-winning Jesus Storybook Bible invites children to discover?through full-color illustrations and three read-along CDs?that Jesus is at the center of God’s great story of salvation… and at the center of their story, too. This beautifully crafted deluxe edition, with ribbon marker and audio CDs, is a wonderful gift and sure to become a family treasure.

Sally Lloyd-Jones is a leading writer of inspirational books for children, with an expertise in conveying biblical truth to young children. She is the author of three bestselling childrena€™s Bibles, including the Gold Book Award-winning Babya€™s First Bible and, most recently, the Moonbeam Award Winner - The Jesus Storybook Bible. She has written many picture books for children, including Handbag Friends, Time to Say Goodnight and the critically acclaimed, How to Be a Baby: By Me, the Big Sister. A native of England, Sally lives in New York City, and can be found at www.sallylloyd-jones.com.

Jago is an accomplished illustrator with several prestigious awards to his credit, including a Macmillian "Highly Commended" Award for Childrena€™s Illustration in 2003, an AOI Silver Award in 2004, and the National Literacy Association Wow! Award. Jago lives in Cornwall, England, with his wife and daughter.

David Suchet is one of Great Britaina€™s most distinguished actors, best known for playing Agatha Christiea€™s super-sleuth, Hercule Poirot. David has won numerous awards and continues to garner acclaim for his stage, television, and film work. 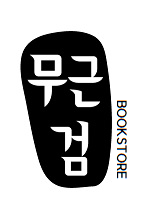